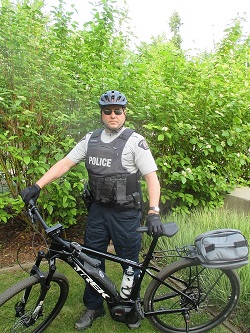 Castlegar RCMP used their two new e-bikes this past weekend at the Sunfest celebrations. As Corporal Brett Turner explained it was the first big event police attended on two wheels.

“We introduced the bikes to a large crowd at Kinsmen Park and then we did patrols through around all the trails around Millennium Park, Zuckerberg island, the trails in behind the Castlegar Complex and then a couple tours up and down Columbia Avenue.”

The bikes will allow police to be more mobile in the evening hours and target crimes such as vandalism or thefts to vehicles and commercial buildings.

“Those usually occur later on in the day so we would be able to be mobile, to be quiet and hopefully do effective patrols in the areas that are of concern,” iterated Corporal Turner.

He added officers won’t always be in uniform on the bikes. One benefit that has is to monitor intersections for distracted driving offences and then tip off a nearby marked police vehicle.

As for how Sunfest weekend went otherwise, there was an increase in impaired driving occurrences. Corporal Turner isn’t sure if that was specifically related to Sunfest or just the warm summer weather. Support was provided from West Kootenay Traffic Services. 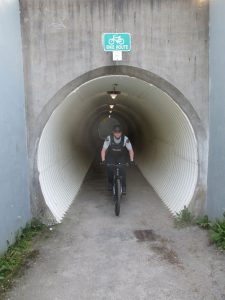