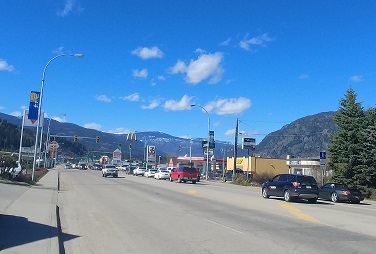 Castlegar City Council had their first look at design options for the second phase of Columbia Avenue this week. The project will only move ahead if grant funding is approved, which would cover roughly 90 percent of the cost. The City’s portion is estimated at $668,454, based on what was presented Monday. If no grant funding comes in, council will have to discuss alternative options.

Like Phase One, Phase Two looks at upgrading the road way and some of the utilities underneath the highway on the south side of town. The Ministry of Transportation and Infrastructure (MOTI) covers paving and road maintenance for the section of road from 20th to 24th and would be resurfacing that area.

The overall idea is to add sidewalks and bikes lanes to both sides of the road. The stretch near Subway, for example, currently has no sidewalk. It would also reduce traffic to one lane in both directions with a middle turning lane.

Mayor Bruno Tassone wasn’t in support of certain aspects of the design, the bike lanes for example. The recommendation is to have a white line separating the bike lane from traffic, instead of the raised curb which was done in Phase One.

“That was my concern from day one was the raised curbs and the cost of it. Everybody said it was about safety and making everybody feel good, now they’re going with just a regular line,” the mayor explained.

As that section is maintained by MOTI, the ministry would not cover the costs of maintaining the bike lane if it has a raised curb; however, they will if it’s only a painted white line. The City plans to eventually have a more family friendly bike route through 5th and 6th avenues. The thinking is that commuters would prefer to use the faster bike route along Columbia Avenue. Also, having a white line only on that section would save the City significant funds in the long term.

Another issue raised by council was a green space or boulevard that would separate the sidewalk from road traffic. Mayor Tassone and Councillor Sue Heaton-Sherstobitoff felt that having pavement there instead was the better option.

“The onward cost of maintaining that green space from now until who knows when. We don’t have any numbers, how much it’s going to cost and that, so I would like to see if it’s just concrete. Wash it off and the it’s done and over with, just like we did on Columbia Avenue itself,” said Mayor Tassone.

Councillor Heaton-Sherstobitoff also worried that sand and gravel would build up on grass in the spring.

While staff felt the green space would provide a nice buffer zone between pedestrians and vehicles, council has asked staff to look at other alternatives. That includes landscaping with small trees and shrubs, but no grass, or simply having it all concrete. Staff will come back to council with a number of different options and price points. Going to the public for their input, if necessary, was also suggested when it comes to the bike lanes.

At this point, Council only agreed to move forward with a design to move electrical services underground on the east side of the road. On the west side, the design proposes to move a number of hydro poles slightly so that they’re off the sidewalk and located in the boulevard instead. The current design also would require the City to enter into negotiations for land acquisition with an estimated cost of just over $90,000. 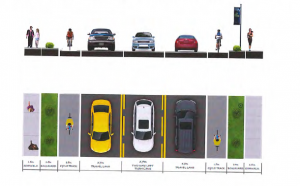