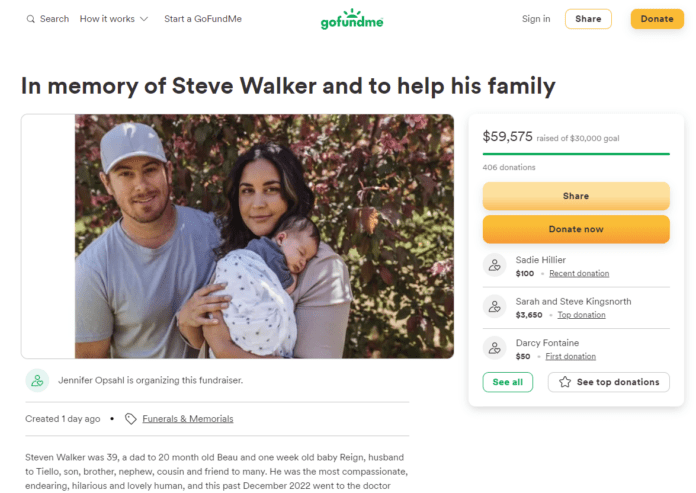 Three separate fundraisers in the West Kootenay for four families suffering from the sudden loss of loved ones have raised over $175,000 and counting in the last week.

Gofundme pages have been established for the families of the Nelson police officers caught in an avalanche, for the toddler who survived a crash on Highway 3A that killed her parents and newborn brother, and for the family of the father of the Trail/Castlegar New Year’s baby, who died of colon cancer.

The fundraiser for the families of Cst. Wade Tittemore, who was killed in the Jan. 9 slide near Kaslo, and Cst. Mathieu Nolet, who was seriously injured, has received more than 500 donations and topped $72,000 en route to a $100,000 goal. A memorial service was held today in Nelson for Tittemore.

More than 700 people have donated through another page dedicated to Meadow Moonflower Mullaney, the two-year old girl who lost her family in a collision at Thrums on Monday afternoon. Her parents, Habib Moonflower, 26, Ashley Mullaney, 25, and eight-day old brother were all killed. The page has raised about $57,000, compared the original $20,000 goal.

And over 400 people have backed a page for the family of Castlegar’s Steve Walker, 39, who died of colon cancer on Jan. 15, just 10 days after his daughter Reign became the first birth of 2023 at Kootenay Boundary Regional Hospital in Trail. More than $72,000 has been raised, over twice the original goal.

“He was the most compassionate, endearing, hilarious and lovely human,” organizer Jennifer Opsahl wrote of Walker, noting that he went to hospital last month feeling unwell and only then learned that he was in the advanced stages of colon cancer. He was admitted to hospital on Christmas Eve, then transferred to Kelowna on Jan. 11.

“It is with intense grief and sadness that we set up this gofundme to help provide a better future for his kids without their ever-loving dad,” Opsahl said.

“To give his beautiful and incredibly strong wife a helping hand with keeping up the house and yard work whilst parenting two babies. To aid and support them during the most tragic time we can imagine.”

The Castlegar Rebels have also announced they will donate the proceeds of their home games this weekend to the Walker and Mullaney families, and will provide donation boxes for fans who would like to contribute.