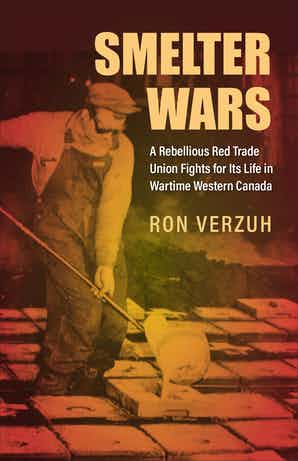 A recently-published book takes a deep look at union organizing efforts at the Trail smelter during and after World War II along with the political, cultural, and social forces that shaped the city.

“Smelter Wars is a metaphor for a lot of things that happened in Trail during the war years and after the war,” says author Ron Verzuh, who was born in Trail and has published other books on labour and local history. “It struck me as a good way to tackle the history of the town during a very conflicted period.”

The book begins in 1938 with the arrival in Trail of Congress of Industrial Organizations (CIO) organizer Arthur (Slim) Evans, who established Local 480 of the International Union of Mine, Mill and Smelter Workers.

In 1944, the local was recognized as the official bargaining representative for thousands of workers at the Consolidated Mining and Smelting operation. But it was far from smooth sailing, as the union ran up against company brass, the existing in-house union, and leaders of the Cooperative Commonwealth Federation.

The book continues through 1955 when Mine, Mill merged with another union and the Canadian Labour Congress formed.

Among topics discussed along the way are the smelter’s contribution to the Manhattan project, which developed heavy water for the atomic bomb, and Trail’s support to restore singer/activist Paul Robeson’s passport in the 1950s.

“The book tries to say that Trail has made a mark internationally [in ways] that we may not be fully aware of,” Verzuh says.

“Obviously the Trail Smoke Eaters winning [the World Championship] in 1939 figures in the book, but other things were maybe unspoken, such as the banned Hollywood movie Salt of the Earth being shown. Trail [prompted] that through its union. That was breaking ground. That was defying the powers.”

The book began as a PhD dissertation, but Verzuh says he has done a lot of work to make the text more accessible for a general audience, adding historical events that he found fun to uncover.

“That makes the book more stimulating reading because you see it in a larger, global, or international context,” he says. “I wanted to pull it together in a much broader context. I wanted to show, in a labour of love, what the town I was born in was made of in that period and what happened to it.”

Smelter Wars can be purchased at Crockett Books.

You can listen to the entire interview with Verzuh below.