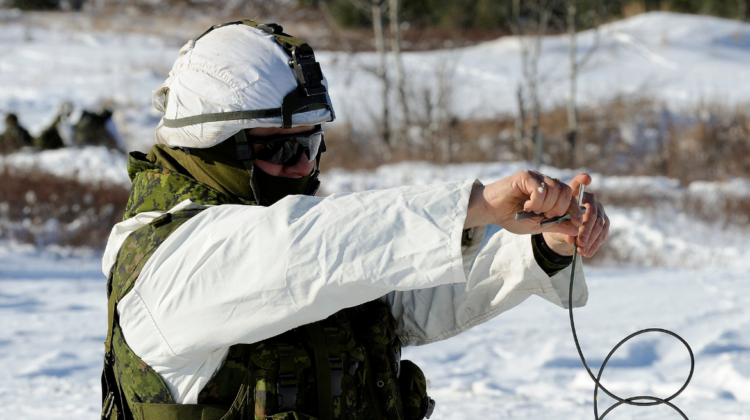 Fire in the hole! Expect to hear some blasts on Saturday. Creston Fire Rescue and local RCMP have also been warned. (Supplied by Major Nils French. Commander, 44 Engineer Squadron)

Troops, trucks and explosions in the Creston Valley? This is only a drill.

On February 20th, soldiers primarily from 44 Engineer Squadron based in Trail and Cranbrook will be honing their skills while also pitching in with wetland restoration on Lower Kootenay Band (LKB) territory.

Major Nils French said military personnel will blast holes in such a way that allows for water to flow back, creating wetland over time albeit in a more dramatic manner.

“It gives a more natural dispersion when the soil is spread,” said French. “The military engineers use the explosives to do what we call cratering. In this case, it’s not so much a trench but a pond as there will be a cluster, not a line.”

According to French the charges are buried two metres below the surface, the noise is expected to be moderate, and will not cause any damage. Sentries will be in place, including patrolling snowmobiles to ensure public safety in the unpopulated marshy area.

Creston residents may hear these explosions as early as 9:00 a.m on Saturday with work expected to finish before sundown. 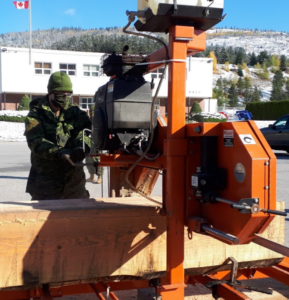 Mobile mills like this one are used to convert local trees into lumber on the spot. (Supplied by MAJ French)

In addition to blasting, military personnel will set up a mobile mill to survey, design and build a bridge using nearby resources.

“The 39 Combat Engineer Regiment is planning to do a large bridge build on Vancouver Island next fall and one of the things we need to be doing is practice on some of those skill before we undertake that job,” French added. “There are locations on Lower Kootenay band Land that is suitable to undertake that kind of training and they’ve graciously allowed us to come out and use these areas.”

LKB Chief Jason Louie is a veteran having served also with the 44 Engineer Squadron and said he has a good relationship with French.

“This is training for them, however, this ties into the long-standing project we’ve had with the restoration of the wetlands that’s been ongoing for years,” said Louie. “Marshlands are so good for the environment and it’s a project where I’ve been trying to bring them in for some time.”

Louie mentioned an old bridge that had washed away years ago that leads to a prime duck and goose hunting area. With Saturday’s exercise, Louie said a new bridge will restore access for vehicles up to the size of an ATV.

“There’s still a number of people who rely on wild game for sustenance so this is really helping out the traditional hunters and helping preserve the lasting legacy of our marsh and wetlands,” Louie added.

Training aside, Louie also plans to meet with the military personnel to talk about local history.

As for recruitment, French said the 44 Engineer Squadron is looking to fill its ranks. For Chief Jason Louie, it’s a path he endorses.“It’s tough for me not to sound impartial given my history, but there’s a lot of skills that you can learn from the military. The military evolved so much from my time and even our grandparent’s time.  It gave me a lot of skillsets that help me in my position of Chief today.”

Ultimately the exercise will progress the Lower Kootenay Band wetlands development and simultaneously train Canada’s military to engineer solutions for remote location both inside of Canada’s borders.