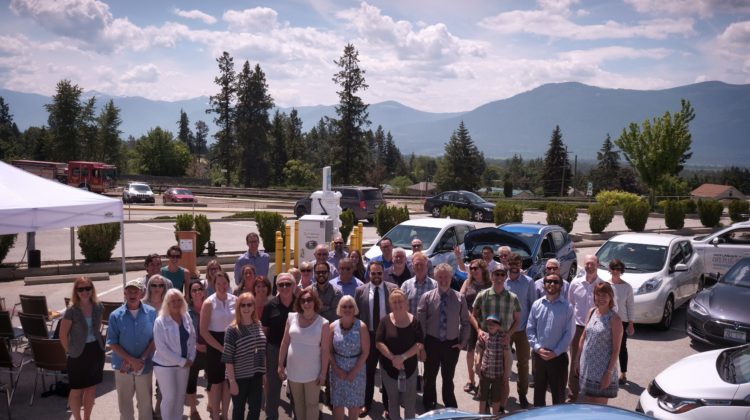 Partners and stakeholders celebrated the completion of the Accelerate Kootenays network in May 2018 in Creston. Representatives from the RDEK, RDCK, RDKB were joined by local government officials, Teck, Columbia Basin Trust, BC Hydro, FortisBC and the Provincial government – including Hon. Michelle Mungall. (Supplied by Community Energy Association)

The RDEK said the Visionary Award it, the RDCK and RDKB won honours innovative environmental initiatives in communities across Canada.

“Accelerate Kootenays is Canada’s first community-driven, collaborative strategy to build a clean transportation network. It was a 2-year, $1.5-million initiative of the Regional Districts of East Kootenay, Central Kootenay and Kootenay Boundary with support from Columbia Basin Trust, the Federation of Canadian Municipalities, Teck, the Province of BC, FortisBC, BC Hydro, and Powertech Labs,” said the RDEK.

The award winners were announced on Monday, September 14th.

“As a small rural area in British Columbia, we are proud of the meaningful impact Accelerate Kootenays will have on reducing our carbon footprint. This project is an example of innovation and partnership and it is an honour to see it recognized at the national level,” said Rob Gay, Chair of the Regional District of East Kootenay.

The project created an electric vehicle (EV) charging station network to make travel to and within southeastern B.C. convenient and reliable for EVs.

“Local solutions—scaled up—deliver major national impact, like economic growth and the emission reductions Canada needs to meet its climate change goals. Whether it is through improved energy efficiency, fewer greenhouse gas emissions or stronger local infrastructure, local governments get the job done efficiently and cost-effectively because they connect solutions to local needs and local realities. This year’s FCM Sustainable Communities Award winners embody those principles of sustainability and collaboration. Moreover, they exemplify how municipal innovation can have concrete impacts and deliver for Canadians,” said Bill Karsten, President of the Federation of Canadian Municipalities.

The RDEK said the Federation of Canadian Municipalities (FCM) chose just 11 communities for their efforts in one of nine categories: asset management, brownfields, climate change, energy, neighbourhoods, transportation, waste, water and a new category in honour of the Green Municipal Fund’s 20th anniversary.

On October 20th to 22nd, winners will each deliver a TED-talk style presentation at the FCM’s virtual Sustainable Communities Conference.

Following the conference, each participant will also be eligible for the Inspire Award, given to the most creative and innovative project.

Winners of the various categories include:

More details on each of the winners and their projects can be found here.