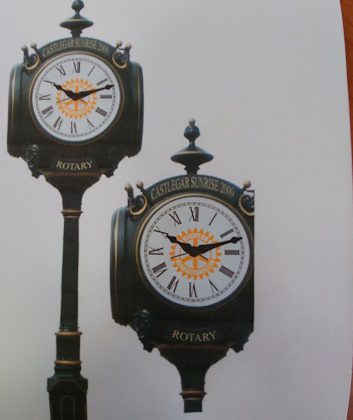 A new statue might soon be popping up in Castlegar’s Spirit Square, but this one will give you the time.

A twelve and a half foot street clock is going to be donated by the Sunrise Rotary Club as part of their 20th anniversary.

The clock will fit in with what Castlegar is already doing says President Eric Lawson: “We wanted to do something special. When we raise money, we want to use that money in the community and we thought that this project would fit in perfectly with the city’s program of civic enhancement.”

Club member Don McDowell came across the idea while looking through a Rotary magazine and the club started fundraising.

The clock will become another of the city’s fixture, says McDowell: “We donate it, but once we’ve donated it – the maintenance and whatnot is up to the city to take care of.”

Council was in support of the idea at Monday’s meeting and the City anticipates the maintenance and electrical costs to be minimal.

The City will provide a base and install it, which is estimated to cost $5,000.