A 31-year-old Salmo man is facing an assault charge after an apparent road rage incident on Highway 3B.

RCMP say it happened one evening last week on the Montrose Hill. An 18-year-old Trail man was driving westbound when another driver began braking hard in front of him. The Trail man then turned into the Walmart parking lot and the other driver followed, opened the man’s door and assaulted him in his vehicle before fleeing.

Police tracked down a suspect who has been released on conditions. He’ll face one count of assault when he appears in court on March 2.

“Please report traffic incidents that occurred on the roadway to the police so they can be handled in a calm and professional manner,” Sgt. Mike Wicentowich said in a news release.

“An assault charge can affect your entire life and may prevent you from pursuing legitimate opportunities and occupations. If you are experiencing anger on the road, pull over and take a minute to let it pass.”

A Trail woman is out almost $7,000 after what police call a sophisticated telephone fraud.

She was having trouble accessing her account and did an online search for a phone number, then contacted someone she believed worked for the company.

She didn’t realize the number was actually on a fake website designed to mimic the legitimate company’s website.

The person directed the woman to download two software applications before arranging a video call with her. The scammers convinced the woman to send them two electronic money transfers, electronic gift cards and digital currency.

The funds were not recoverable.

“Most legitimate companies will not ask for personal details over the phone and not ask for funds to be transferred to them in the form of electronic money transfers, gift cards, or digital currency,” Wicentowich said.

“Some fraudsters set up copycat websites in order to trick people into calling them. Check the website address in your internet browser to make sure it is the correct one and use a recognized security software provider to help you detected fraudulent website.”

Police say it happened Sunday afternoon. The driver got a $360 fine for excessive speeding and had his vehicle impounded for up to a week.

“The driver was not aware that his vehicle could be impounded for driving 40 km/h over the speed limit,” Wicentowich said. “It came as quite a shock to lose his vehicle.”

Man flashes knife then passes out

Police responded to a report of a man flashing a knife in the 800 block of Schofield Highway in Warfield Sunday afternoon.

When they arrived they found a 39-year-old Nelson man passed out on a bench with a knife and drug paraphernalia.

He was arrested for possession of a weapon for a dangerous purpose and drug possession. A search turned up packaged fentanyl and meth. Police say he appeared drunk.

Police want to speak to a couple of youths following a reported from the Trail library. Last week police noticed Play Station 4 games missing from their plastic cases. The value of the missing games was a little under $600.

Trail RCMP obtained video footage from inside the library and want to identify and speak to the two boys shown below.

If you know the identities of the young men, please contact Trail RCMP. 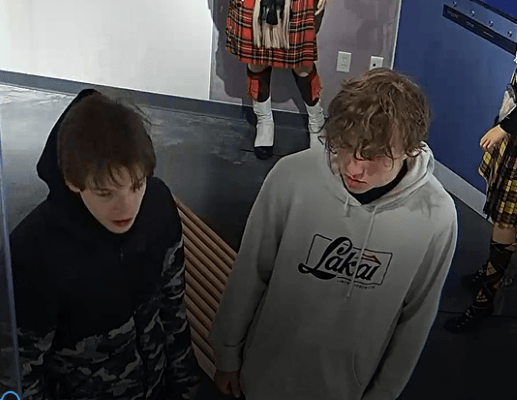 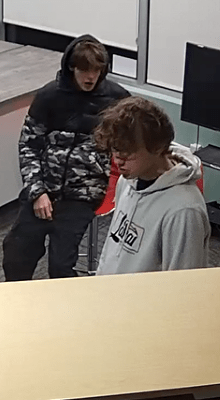