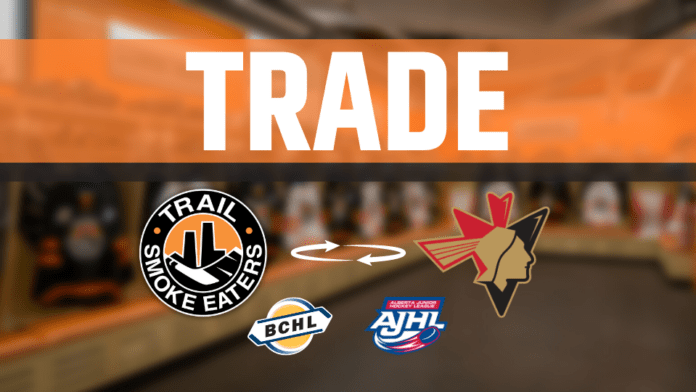 The Trail Smoke Eaters have made their second and third trades this week,

They sent goalie Cole Tisdale to the Bonnyville Pontiacs of the Alberta Junior Hockey League for the rights to forward Ty Hurley and future considerations.

Hurley, 18, is currently playing in the Western Hockey League with the Seattle Thunderbirds, where he has one assist in three games. He previously played 16 games this season for Swift Current, also recording one assist. He’s from Sherwood Park, Alberta.

Tisdale has played 312 minutes over 12 games this season and given up 26 goals for an .862 save percentage. The Smokies still have two goalies on the roster in Teagan Kendrick and Keegan Maddocks.

Kurrle is in his first year in the BCHL, scoring three goals and adding one assist in 20 games so far. The move brings the Smoke Eaters down to the required six import maximum after acquiring Ethan Mann earlier this week for Quinn Disher.