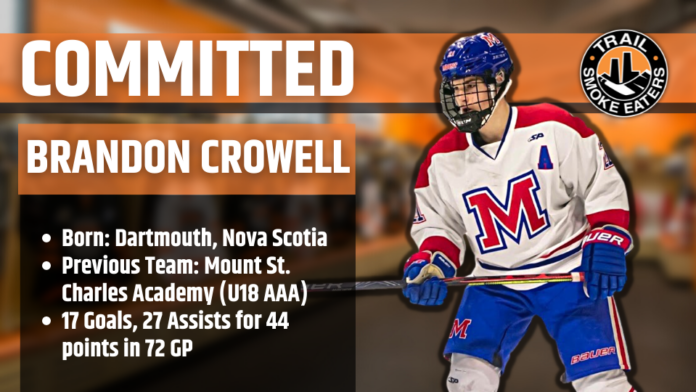 The Trail Smoke Eaters’ newest addition comes to them from Nova Scotia via Rhode Island.

Brandon Crowell, 18, will join the team next season.

Crowel is from Dartmouth, Nova Scotia but has played the last few years in Rhode Island with Mount St. Charles Academy.

The forward helped Mount to six different championship titles, topped off by a USA U18 National Championship. In 72 games this year, he had 44 points, with 17 goals and 27 assists.

“I’ve only heard and read great things about [Trail] and the organization,” Crowell said in a news release. “I look forward to bringing my all to the team and the fans next season.”

“Brandon is coming off a very successful season with a national championship,” GM and head coach Tim Fragle said. “He plays with pace and brings a hardnosed north-south game. He plays with a lot of detail in his game and possesses a strong shot.”