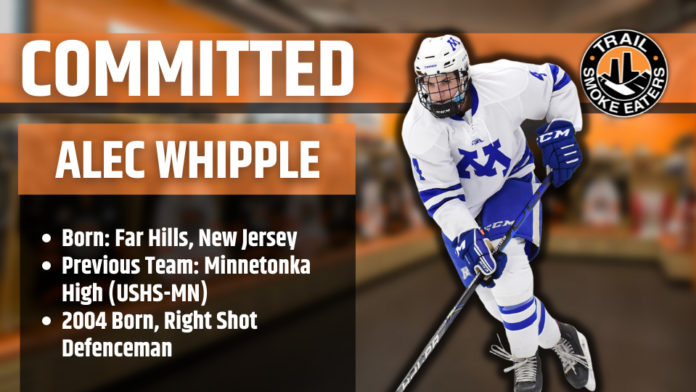 The Trail Smoke Eaters have signed defenceman Alec Whipple for next season.

Whipple, 18, was born in Far Hills, New Jersey, but has played the bulk of his high school hockey in Minnesota. He played a total of 38 games this year across three different leagues, including 27 games at Minnetonka High where he had a goal and eight assists.

The Smokies say the right shot, six-foot-one defenceman was a steady presence on the back end in Minnetonka and will bring “a strong skating ability, size and grit” to Trai’s defensive core.

“When I arrived in Trail for the first time, I envisioned myself playing here because of the small town feel and the passion this town has for its team,” Whipple said in a news release.

“Alec is a smooth skating defenseman who brings a lot of skill and compete,” associate coach Dustin Korlak said. “He has a strong hockey IQ and exceptional puck moving ability.”