Police say a car fire in Trail is thought to have been deliberately set.

Firefighters and officers responded to the blaze in the 1500 block of Pine Avenue around 3:30 a.m. on April 26. The red Chevrolet HHR was nearly full engulfed.

Police are asking anyone with information about who started the fire to contact them.

Thefts from vehicles an ongoing problem

Police say they continue to see thefts from vehicles.

On April 25, they received a report that a backpack and ammunition was stolen from an unlocked truck in the 2100 block of Monte Cristo Street in Rossland. The suspect was captured on video surveillance stealing the items, as seen below. 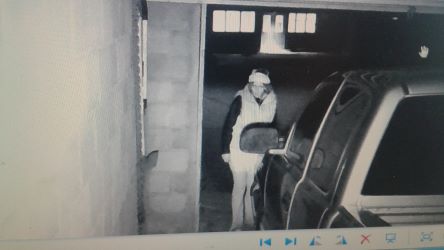 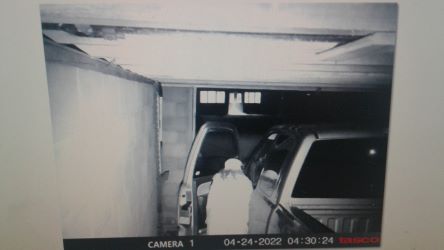 If you have any information about the identity of the suspect or know where the stolen items are, polie want to hear from you.

Police say on April 30 and May 1 they also received reports of a man and woman rummaging through an unlocked vehicle in Rossland.

Trail RCMP believe that the man and woman continue to operate in the area and will target unlocked vehicles, says Sgt. Mike Wicentowich. Please lock your vehicles and secure your car keys in a safe place.

Police also recovered a truck stolen on April 30 from the 1400 block of Leroi Avenue in Rossland, which was left with its keys inside. It was later located with a small amount of money missing.

Wicentowich is praising the actions of one of his officers who revived a man with Naloxone.

On April 29, Cst. Connor Nickel was flagged down by a group of bystanders in the 1400 block of Bay Avenue in Trail.

He discovered an unconscious 39-year-old Trail man laying on the ground who had stopped breathing after allegedly consuming fentanyl and meth.

Nickel administered Naloxone to man, who began breathing again, though he remained unconscious.

Paramedics attended and administer two additional doses of naloxone to the man, who then regained consciousness. He declined further medical treatment.

I would like to thank Cst. Nickel for recognizing the danger that this man was in, and taking immediate action to save his life, says Wicentowich. I would also like to thank the paramedics for their quick response and contribution to ensuring this incident ended well.