A Castlegar woman who organized a local rally for Ukraine on Sunday says she was heartened by the community response.

“It’s very easy in this time to feel helpless and lonely but apparently I’m not alone with these feelings,” Olga Hallborg says. “When we come together it helps everyone.”

Hallborg came to Canada 15 years ago from Ukraine and spent about seven years in Saskatoon before her family relocated to Castlegar. She has a busy job as a health care worker.

Sher hometown, Mykolaiv, in the southern part of Ukraine, is among those cities that have been targeted by Russian air strikes.

“It’s happening right there,” she says. “It’s one of cities where things are really unwell.”

Earlier this week, Hallborg says she spent a restless night after watching videos of attacks on Mykolaiv and the nearby city of Kherson, which showed “lots of destruction on streets,” making it hard to recognize where they were filmed.

Hallborg said Tuesday that the last couple of days had been a bit quieter and some of her friends were able to get back to work.

“It’s not the same routine as a normal life but they are grasping for routine and trying to stay positive,” she says. “It’s very important especially in the midst of the war.”

Hallborg says she is worried about the fate of Kherson, where Russian forces claim to have taken control, and the consequences it could have for her family and friends in Mykolaiv.

She says some residents have Mykolaiv have left, but it’s not an option for everyone, especially those who don’t have their own vehicles. Mykolaiv is on a peninsula, she added, surrounded by rivers and only connected to other land masses through bridges.

“So there’s not much access right now to going even if they chose to do so,” she says. I guess people had the opportunity and time to do it before, but right now I don’t think it’s an option. They’re staying where they are and hoping for the best. But that’s really uncertain and very scary.”

Hallborg says in watching other rallies held across Canada and around the world, she searched for something locally, but not finding anything decided to organize one herself.

She connected with Castlegar’s small Ukrainian community and quickly put together the event.

“We didn’t have much time for preparation,” she says. “It was really just a matter of hours. But because of the genuine support of the community in Castlegar and Doukhobor community and leadership of our city we actually had quite a few people, around 50 people. Some came from places like Ainsworth. That was really inspiring.

“The purpose of these peaceful gatherings to support Ukraine is wider. It is to support freedom, democracy, safety of people and that is related to all world populations.”

Hallborg says residents can best help Ukraine by donating to the Canadian Red Cross or UNICEF.

You can hear the full interview here: 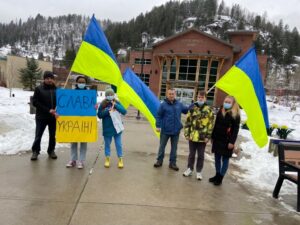 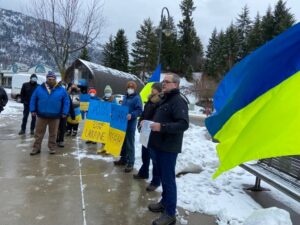 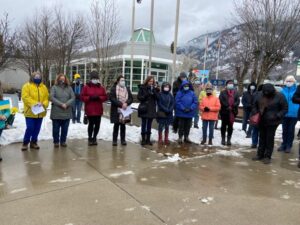 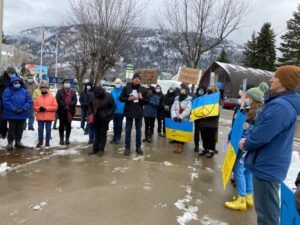 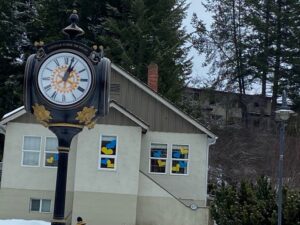 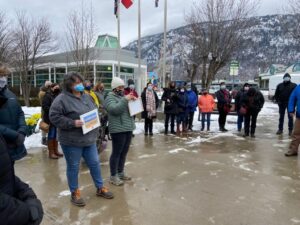 BC ombudsperson looking into sale of Castlegar park

Analyzing the candidates for office in West Kootenay/Boundary