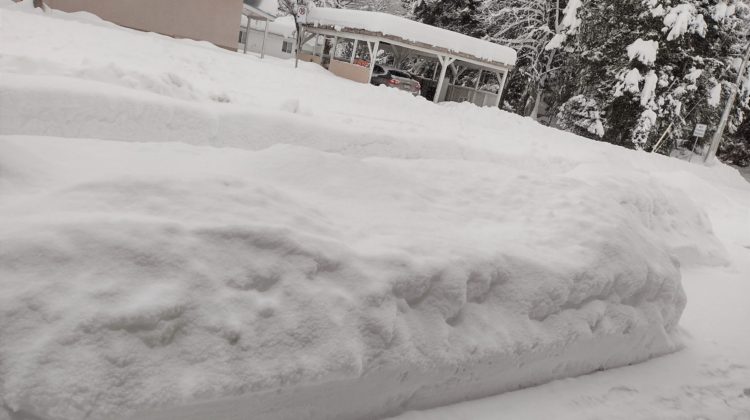 Snowbanks like these can be found throughout the West Kootenay. (Greg Nesteroff/Vista Radio)

RCMP say a 55-year-old man died suddenly after shoveling snow in the 2100 block of Cook Avenue in Rossland.

Police say on Sunday afternoon the man and his wife were clearing snow from their property. The man began to feel ill and went inside to rest. His wife found him unresponsive inside the home a short time later.

BC Ambulance arrived quickly and tried to revive the man, but were unsuccessful despite what police call a “lengthy and heroic effort.”

Family, friends, and RCMP victim services unit are providing emotional support to the man’s wife, police said. They have  referred the matter to the BC Coroners Service.

“Trail RCMP extends its sincere condolence to the widow during the aftermath of this sudden and unexpected incident,” Sgt. Mike Wicentowich said in a news release.”

“Please be careful when exerting oneself during snow removal after the recent heavy snowfalls and, if you can, help those who may need assistance in cleaning up snow from their properties.”

Also Sunday, Trail RCMP responded to a report of an assault of a 51-year-old Trail man by a 44-year-old man in the 4000 block of Casino Road.

The victim was shoveling snow when his neighbour became upset about some snow that was shoveled onto his property. The neighbour confronted him and allegedly punched him several times.

The victim was not injured, however, and asked RCMP just to warn the neighbour, which they did. Police say the neighbour could still be charged with assault if the victim changes his mind.

Wicentowich says they frequently respond to snow-related disputes between neighbours.

RCMP say a snowbound woman stranded inside a home on Lookout Street in Trail sent an SOS with a flashlight. And while it worked, they don’t recommend anyone do the same thing.

Late Tuesday, a woman noticed the signal and reported it to police. She was able to guide officers to the source and they then hiked through deep snow in a long, unplowed driveway.

They spoke to the signaler, a 37-year-old Nelson woman, who was fine but had become stranded inside the home due to the unplowed driveway. The woman said she was trying to signal the City of Trail or the fire department to help her clear snow off the driveway.

Police offered her advice on how to get the driveway cleared and warned her not to use SOS in this situation. They are not sure why the woman didn’t use the phone instead.

“We ask the public to only use it in emergency situations,” Sgt. Wicentowich says. He thanked the woman who contacted them and guided them to the distress signal “with surprising accuracy.”

“The attending officers were impressed with her ability to interpret the signal and help us quickly find the location,” he said.