COVID-19 cases continue to ramp up across West Kootenay 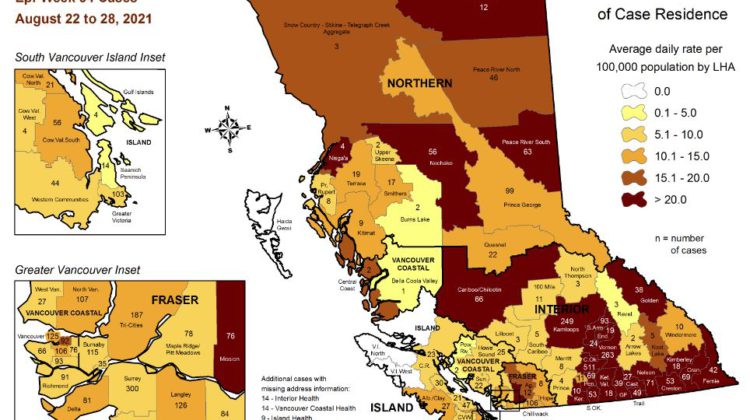 COVID-19 is continuing to spread through the West Kootenay, with 188 new cases reported in the region last week.

Data from the BC Centre for Disease Control (BCCDC) covers August 22nd to 28th.

The Nelson area has seen the highest number of new infections last week, with 71 cases reported. Meanwhile, Trail has reported 49 in the same time frame.

According to the BCCDC, 39 new cases were reported in Grand Forks, 27 in and around Castlegar, and five in the Arrow Lakes area.

Creston has also seen 53 new cases throughout the past week.

The Interior Health region has reported the highest numbers of new cases in all of B.C. in recent weeks. Most of them have been in the Okanagan area.

Across the Interior, 50 people are being treated for COVID-19 in hospitals, while 36 of them are in intensive care.

IH officials reported 266 new cases between Tuesday and Wednesday, with a total of 2,299 active infections.

Fully vaccinated people over 12 years old continue to slowly climb in number across the West Kootenay. The percentage of people 12 and up who have received both doses followed by those 50 and up for the entire region can be found below: