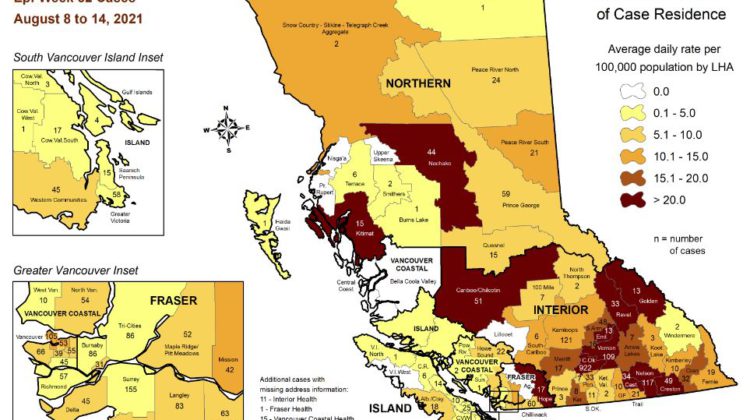 (Supplied by the BC Centre for Disease Control)

COVID-19 cases are rising in the region, with 189 cases reported in the West Kootenay through the second week of August.

According to data from the BC Centre for Disease Control (BCCDC), Nelson saw the highest number of infections, with 117. The Castlegar area was close behind with 34. The updated data covers August 8th to 14th.

A further 21 cases were reported in Trail, 10 confirmed in Grand Forks, and seven cases within the Arrow Lakes area.

Just outside of the region, Creston reported 49 cases throughout last week.

By comparison, the West Kootenay saw just 26 cases between July 11th and 17th.

Currently, the Nelson Jubilee Manor has an active outbreak with four cases: one resident and three staff members, with one death connected to the outbreak.

Interior Health has confirmed 230 new cases on Wednesday, August 18th, with a total of 3,203 active infections.

A majority of the health region’s recent cases have been reported in the Central Okanagan area, which confirmed 922 new infections last week, making it the highest single area in the province.

103 people in the Interior Health region are being treated for COVID-19 in hospital, 53 of them are in critical care.

B.C.’s rise in cases comes despite the fact that 73.8% of all British Columbians 12 and older are fully vaccinated.