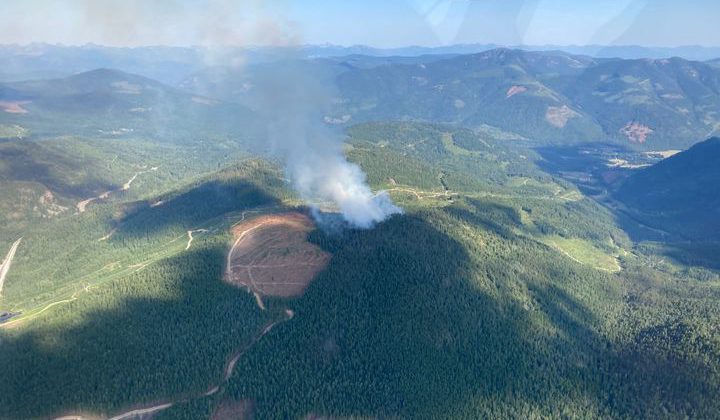 (Supplied by BC Wildfire Service)

The BC Wildfire Service is fighting a wildfire near Beavervale Creek.

Crews say the fire was first discovered on Saturday, July 10th, and has since grown to the size of 35 hectares.

According to the BC Wildfire Service, it is burning out of control and is being classified as a wildfire of note.

In total, officials say there are 33 firefighters, three helicopters, and five pieces of heavy equipment trying to control the blaze.

“Crews and equipment continue to make good progress on the ground. The spot fire yesterday was successfully suppressed and is under control,” said BC Wildfire Service.” Crews wrapped sprinklers around the perimeter of the main fire to keep the area wet for the overnight burning period. Crews have also been actively working on another small excursion on the east side of the fire and have it wrapped in hose. Helicopters are returning to this incident today and continue bucketing the fire throughout the day.”

“Yesterday, air tankers reinforced the west flank with retardant, giving crews the time they need today to work on hand building control lines in that area that is not workable for equipment guard. Part of the objectives today is to tie those hand-built control lines in with an already established fuel-free. Heavy equipment is working on the southwest corner to support ground crews as needed.”

Crews say smoke from this fire may be visible from Castlegar, Salmo, Trail, and surrounding communities, as well as anyone traveling on Highways 3 and 3B in those areas.