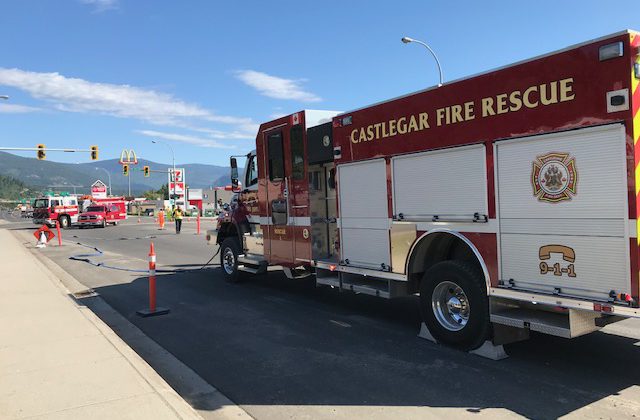 “The incident occurred around the 2000 block of the Columbia Avenue Phase Two Redevelopment Project. One of the equipment operators accidentally struck a 3/4 inch gas line, which required us to attend in the interest of public safety by shutting down traffic on Columbia Avenue from 2000 block to 22nd street,” said Sam Lattanzio, Fire Chief at Castlegar Fire Department.

Lattanzio said FortisBC crews were on scene to fix the minor leak and no real damage came out of the event.

“There was a couple of residential properties however there was nobody home at the time of the incident,” said Lattanzio. “There were a couple of businesses including the subway and the notary office, that were made aware of what was going on. We had to shut down the subway drive-through but we allowed them to continue to operate pedestrian traffic.”

After the incident, Lattanzio wants to remind the public, when crews are working on an emergency scene, to give lots of space and avoid the area, when people go too close to an emergency they are potentially putting both parties at risk.