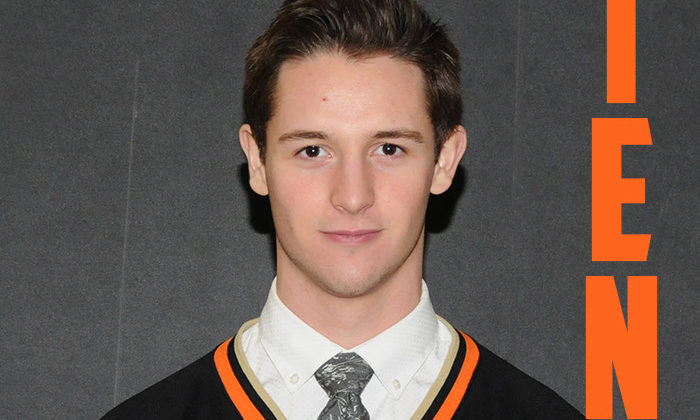 Josh Wiens was awarded with the Remembering Grant Sheridan Scholarship. (Supplied by the KIJHL)

The former Kelowna Chief and founder of the MindRight for Athletes Society, Myles Mattila, was the one to phone Wiens and let him know of the award.

“It was good that he reached out and it was good to talk to him,” said Wiens. “I was pretty thankful and said thank you to him a couple of times. My first thought was maybe he was just going to interview me and talk to me about the award. I thought maybe he talked to some of the other candidates first. Then he told me I won it. It took me off guard.”

“I would like to congratulate Josh Wiens on being the recipient of the 2021 Grant Sheridan Memorial Scholarship. Josh has exemplified being a role model and leader for his hockey team and community,” said Mattila. “He leads by example through volunteering in the community and by being captain of the Castlegar Rebels. I am excited to see what Josh will be accomplishing in the future while he’s attending college and playing hockey for Briercrest.”

Wiens also recently received a KIJHL bursary and said he gained a lot from playing in the league and loved to be involved in the community. The captain made sure that he was giving back to the community to thank them for the support.

“It’s something that I like to do. We got to do things with schools,” said Wiens. “What we were asked to do was always fun. I think it was cool to meet some of the people.”

Carter Duffins, coach and GM of the Rebels thinks there is no one more deserving of this award as he prides himself in improving as a hockey player and as a young man.

“I’ve been excited to watch him grow as a young man. He was always one of the guys to make sure that he would step up and lead the way, whether it was working as a volunteer with some of our community work or some of our fundraising initiatives,” said Duffin. “His focus was on improving and being better and making a diligent effort to show leadership.”

The Grant Sheridan Scholarship is a &1,500 scholarship in memory of the longtime Kelowna Chiefs owner and general manager, to one Kootenay International Junior Hockey League player.