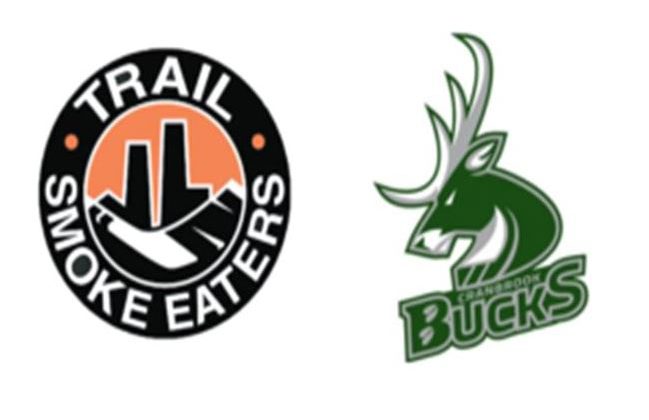 (Supplied by the Trail Smoke Eaters and Cranbrook Bucks)

The Trail Smoke Eaters are back to an even record on the season after beating the Cranbrook Bucks 5-3 Monday night.

The Smoke Eaters jumped out to an early one-goal lead after the first period with Quinn Disher scoring his team-leading fifth goal of the season, but Disher wasn’t done scoring just yet. In the second period, the Bucks stormed back to score two goals to take a brief lead before the Smoke Eaters offense woke up and scored four straight goals to end the frame with a 5-2 lead. All four goals were scored by different players with Disher getting his second of the game, Ryan Helliwell getting his third of the season, the fourth on the year for Noah Wakeford, and Justin Ross scoring his first on the season.

The Bucks scored one more goal in the third with Reece Henry scoring his first of the season to make it a two-goal game, but that’s as close as the Bucks got.

The Smoke Eaters got outshot in the game 36-24 with Logan Terness stopping 33/36 to pick up his fourth win of the season.

With the win, the Smoke Eaters now have a 5-5 record and sit four games back of the first-place Penticton Vees who they will play on Friday.