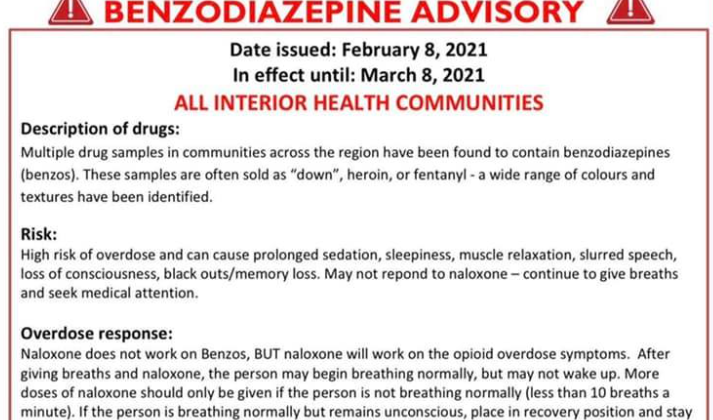 Drug checking within the Interior Health region continues to show benzodiazepines (benzos), often sold as “down,” in multiple samples across several communities.

The health authority said benzodiazepines have been found in a variety of substances most often sold as “down,” heroin or fentanyl.

IH issued the advisory on Monday and will remain in effect until March 8th.

IH has identified a wide range of colours and textures of the drug. The drug carries a number of health risks when used.

Overdoses that involve both opioids and benzodiazepines are more complex to treat, according to IH.

“Naloxone does not work on Benzos, but naloxone will work on the opioid overdose symptoms. After giving breaths and naloxone, the person may begin breathing normally, but may not wake up,” said Interior Health

Interior Health has offered the following information to reduce the risk of an overdose:

MORE: Harm Reduction Services and Locations (Toward the Heart)