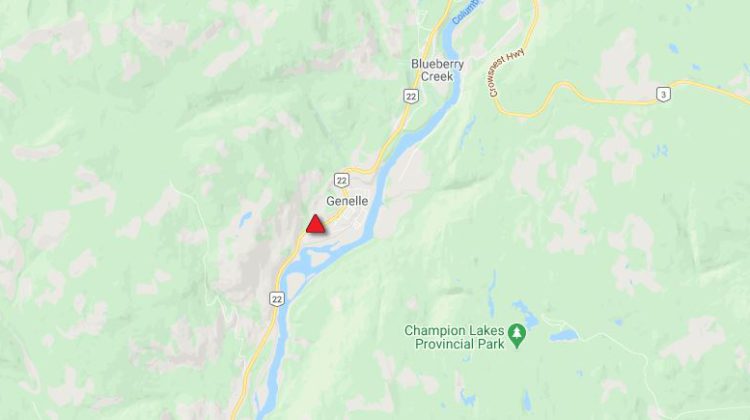 The driver of the crashed pickup truck was air lifted to hospital after sustaining “critical injuries.”

After arriving on the scene, West Kootenay Traffic Services (WKTS) said they determined that the smaller pickup had collided with the oncoming transport truck.

“At this time, investigators have information to believe that the driver of the passenger vehicle may have entered the transport truck’s lane,” said BC RCMP Traffic Services Media Relations Officer Cpl. Mike Halskov. “The cause remains under investigation.”

WKTS  is currently seeking additional witnesses of the event, including anyone with dashboard camera video. Anyone with information may call WKTS in Nelson at 250-354-5180.

Drive BC announced that Highway 22 had been cleared between Hanna Drive and China Creek Road at 12;08 AM. A detour was in effect a full 11 hours after the crash was reported.

Highway 22 is closed in both directions just south of Genelle due to a collision between a semi-trailer and a pickup truck.

The semi Truck driver was treated at the scene.

According to Acting Captain Clay Alderson, a BCAS crew came across the accident while transporting a patient to KBRH.

As both 3:30 pm PST, Highway 22 is closed between the North and South ends of 12th Avenue while the scene is under investigation by RCMP and Commercial Vehicle Safety Enforcement.

Detours are in effect through 12th Ave, however, police ask motorists to please use caution and reduce speeds in the area.

Emergency crews arrived on the scene just before 1:00 pm PDT and had the incident under control 45 minutes later.