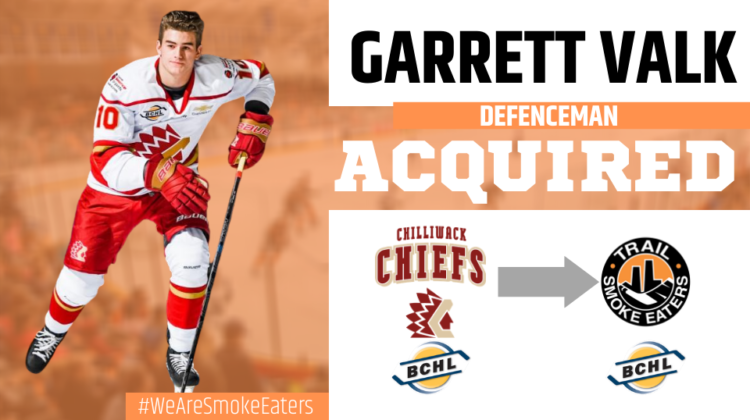 In return for “future considerations,” the Trail Smoke Eaters announced their acquisition of  Garrett Valk from the Chilliwack Chiefs.

Valk played 40 games for the Chiefs last year as a 17-year-old. The year before, Valk was a member of the Vancouver North West Hawks in the BC U18 league where he played top minutes, scoring six goals and adding 13 assists through 47 games.

Valk is also the son of former NHLer Garry Valk, who played over 800 NHL games with teams including the Vancouver Canucks, the Mighty Ducks and the Toronto Maple Leafs.

“Garrett brings experience from playing in Chilliwack last year, he is a young 2002 defenceman with size [6’3″ 210 lbs] and competes very hard,” said Head Coach and General Manager Tim Fragle. “We like his potential as he skates well and is a hard nose defender.”

The Smoke Eaters organization said they are excited to welcome the North Vancouver native to the City of Trail and that they look forward to him joining the team in the coming days.