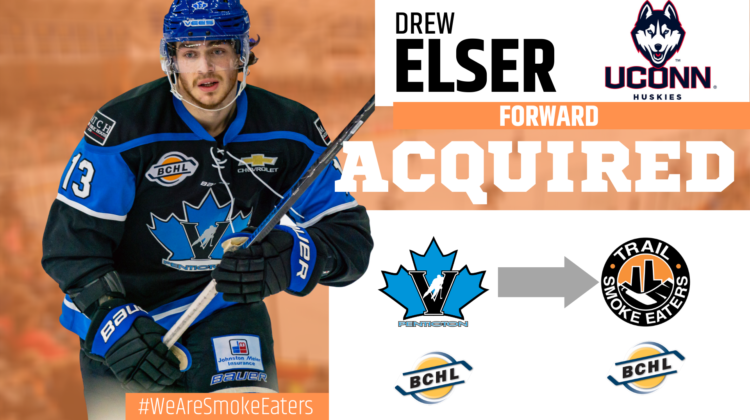 The Trail Smoke Eaters have traded for 20-year-old Drew Elser, from the BCHL’s Penticton Vees.

In order to add to their forward pool, the Smoke Eaters will send future consideration to Penticton to complete the deal.

Elser has spent the past two seasons with the Vees, putting up 8 points (6 goals, 2 assists) in 26 games. Before that, the forward suited up for the United States Hockey League’s Central Illinois Flying Aces where he was able to register 16 points (8 goals, 8 assists) in 36 games.

“Drew is a player that will fit in with our group, he is motivated and excited to come to Trail and help the team in any way he can,” said Tim Fragle, Head Coach and General Manager of the Smoke Eaters.

The native of Hopewell Junction, New York will play one last season in the BCHL. Having committed to the NCAA, Elser will return to the United States to play for the University of Connecticut Huskies.