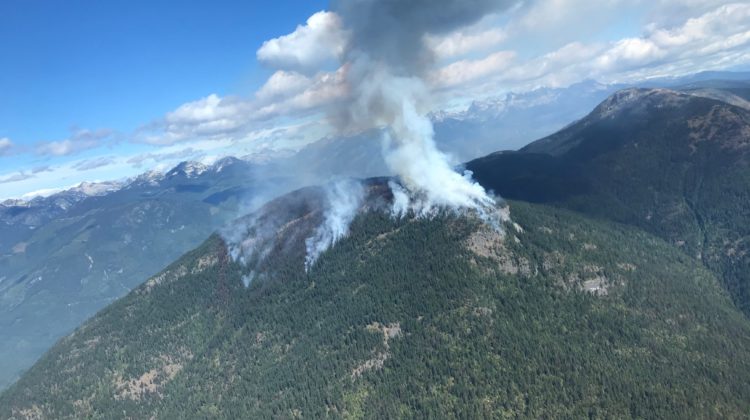 The Talbot Creek Wildfire pictured on Saturday, August 22, 2020. (Supplied by BC Wildfire Service)

The Evacuation Alert prompted by the Talbott Creek Wildfire has been fully lifted for the remaining 46 properties, exactly one month after it was initially put into place.

The Alert was originally put in effect for 305 properties in the communities of Lebahdo, Little Slocan, Passmore, and Vallican by the Regional District of Central Kootenay (RDCK). The Evacuation Alert has been gradually lifted four times since last week. Last Monday, September 14th, only 176 properties remained on Alert, before it was cut to 113 homes the next day. Just before the weekend, another decrease was announced, as only 46 properties remained on Evacuation Alert before those houses were officially removed as of Tuesday morning.

“This has been a stressful month for residents and we appreciate their patience and understanding through this process,” said Chris Johnson, Director of the RDCK Emergency Operations Centre “The BC Wildfire Service has done an outstanding job, in tough conditions, to keep our communities safe. We thank them for all their hard work battling this wildfire over the last month.”

The Talbott Creek Wildfire is still burning about 30 kilometres north of Castlegar. First discovered August 17th, the blaze is estimated at 1,302 hectares. Although crews continue to battle the flames, the BC Wildfire Service said the danger to people and structures has been diminished.