Smoke Eaters brings back former player in pair of trades 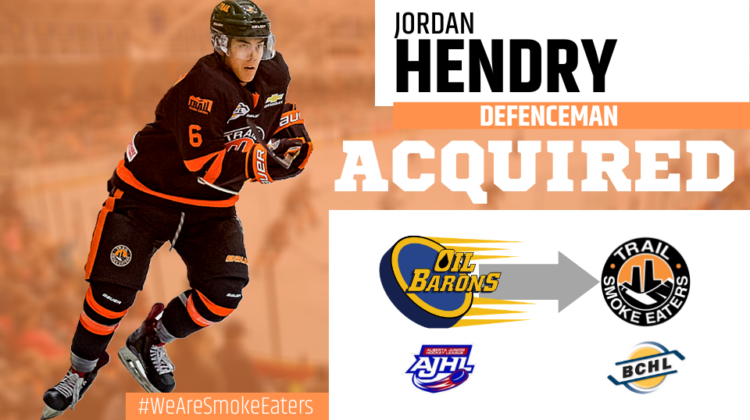 The Trail Smoke Eaters made two deals over the Labour Day weekend in order to get back 17-year-old defenceman Jordan Hendry.

“We believe the importance of Jordan’s return can’t be overlooked,” said Tim Fragle, Head Coach and General Manger of the Trail Smoke Eaters. “With a high compete level and his offensive potential, he will immediately help our defence, considering the players we lost to graduation last year. We’re excited to welcome Jordan back to the Smoke Eaters.”

Kryski, a Kelowna native, spent the last two seasons with the Smoke Eaters, playing 95 games and putting up 39 points (13 goals, 26 assists). Mosimann didn’t play in any games for the Hounds but last suited up for the AJHL’s Lloydminster Bobcats where the Edam, Saskatchewan native scored 36 points in 58 games.

The newly acquired forward’s time with the Smoke Eaters was short-lived however, Mosimann was flipped to the Fort McMurray Oil Barons in the AJHL in order for Trail to get back 17-year-old defenseman, Jordan Hendry.

The Surrey native spent the first 16 games of last season with the Smoke Eaters where he put up two points. Hendry went on to play in eight games with the BCHL’s Powell River Kings before playing the final 10 games of the season in his hometown for the Surrey Eagles. Hendry had a single assist with the team to close out the year.