Health authorities in B.C. are reporting 78 new COVID-19 cases on Thursday, while Dr. Bonnie Henry, Provincial Health Officer provided updates on data regarding the impacts and projections of the pandemic.

Across B.C., health authorities are reporting a grand total of 4,274 cases province-wide since the start of the pandemic.

In the Interior Health region, 398 people have been infected so far.

3,500 people have fully recovered from the illness, while 578 cases remain active.

No new deaths have been attributed to COVID-19; the virus has been responsible for 196 deaths in B.C. so far.

In a briefing on Thursday, Dr. Henry presented updates on the data collected regarding the virus, with a number of new findings.

According to Henry, a larger number of young people contracting the illness has brought the median age of infected people down to 48. The median age for hospitalizations and deaths remains high, at 69 and 85 respectively.

“We started to see a rapid increase in younger people, and that’s been reflected in the numbers we’re seeing and the discussions we’ve had in the last few weeks of exposure events, particularly social events, parties, and get-togethers,” said Henry. 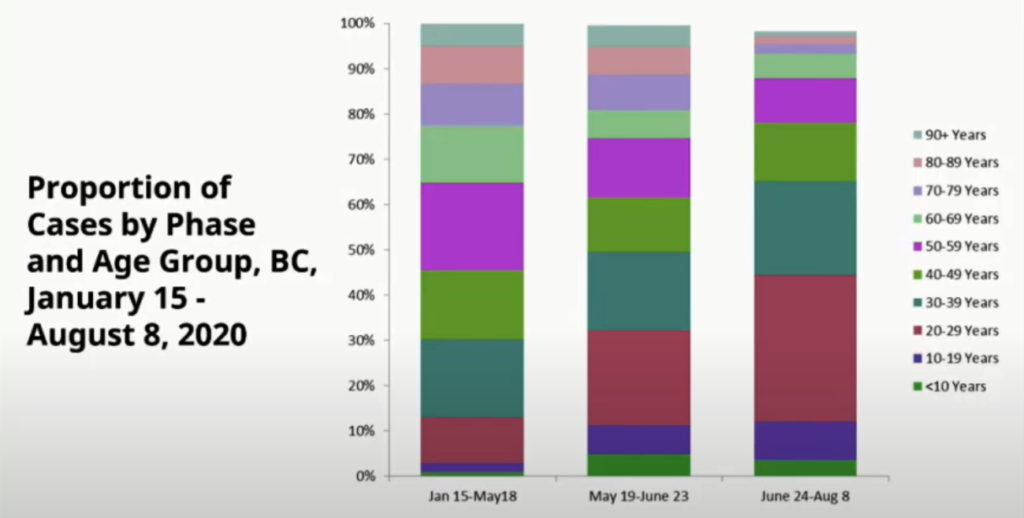 Case numbers by age group through the pandemic. (Supplied by the B.C. Government)

Henry said more work needs to be done to slow the spread of the coronavirus and get new case numbers to where they were before.

“We are on an upward trajectory. That is concerning, but it’s not a predictive model, it doesn’t show us what’s going to happen, it shows up what can happen. Right now, we have it within our ability to make the changes we need to bend that curve back down,” said Henry.

Henry once again advocated maintaining safe distances from others, wearing a mask in close spaces, staying home if you are ill. 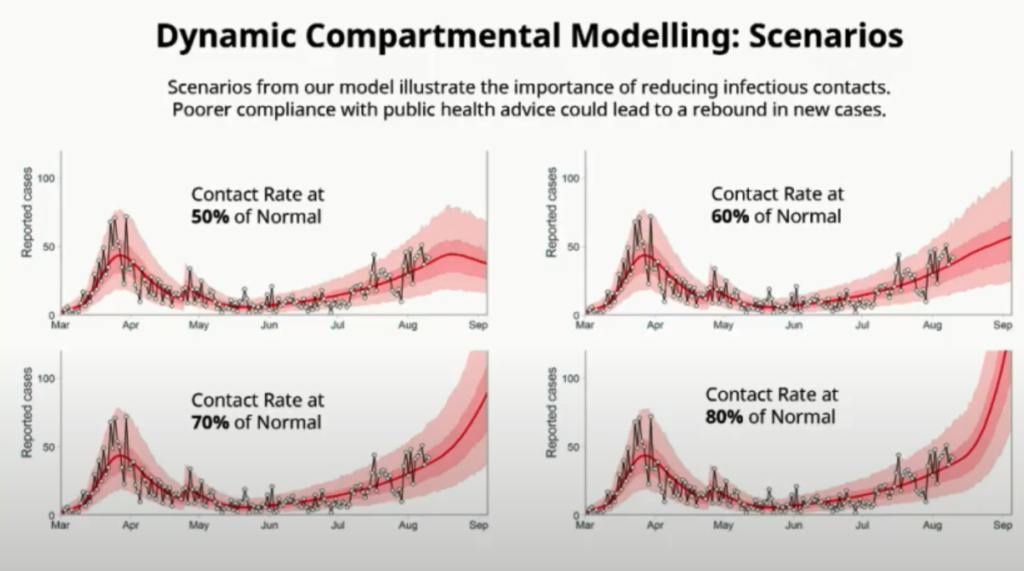 Modelling data showing the possible trajectory of COVID-19 case numbers depending on how many contacts people have. ( Supplied by the B.C. Government)

According to data gathered from a province-wide survey, people in different ethnic groups have been impacted differently from the pandemic.

“We’ve seen around the world, that this virus and the measures that have been taken do expose some of the differential inequities in our communities, and we’re no different,” explained Henry. “West Asian, Latin American and South Asian respondents were more likely to report increased difficulty meeting their financial needs, and more likely to report not working directly because of COVID-19,” explained Henry.

Caucasian respondents to the survey we more likely to have kept their jobs, were less likely to have trouble making ends meet and had less food insecurity. Increased alcohol consumption was also more commonly reported for caucasian people.

Henry added that there was a silver lining to come from the survey as well.

“Latin American, Southeast Asian, and Black respondents were more likely to report an increased connection to family. That is a positive support in terms of resiliency when these measures are happening,” said Henry. 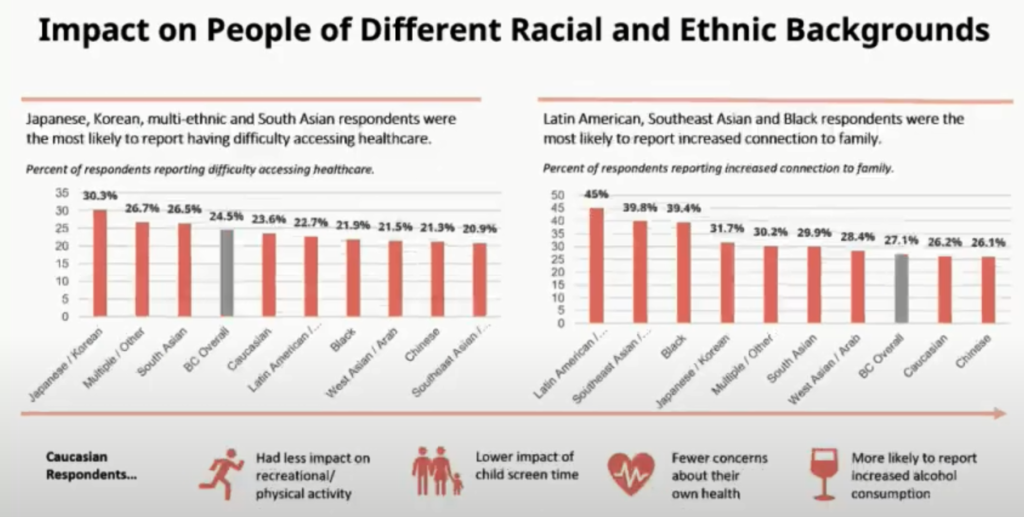 Graphs showing the impacts of the COVID-19 pandemic on different ethnic groups. (Supplied by the B.C. government)

The survey also looked at the impacts of the pandemic on people by income level in the Province.

“We find that individuals in the lower-income strata suffer more negative economic and health consequences from the pandemic. In particular, people in the lowest income level had difficulty meeting financial needs, where over half had concerns in that area,” said Henry.

40% of low-income people were reported to be food-insecure because of the pandemic. As well, 25% of people in the lowest income bracket were not working. 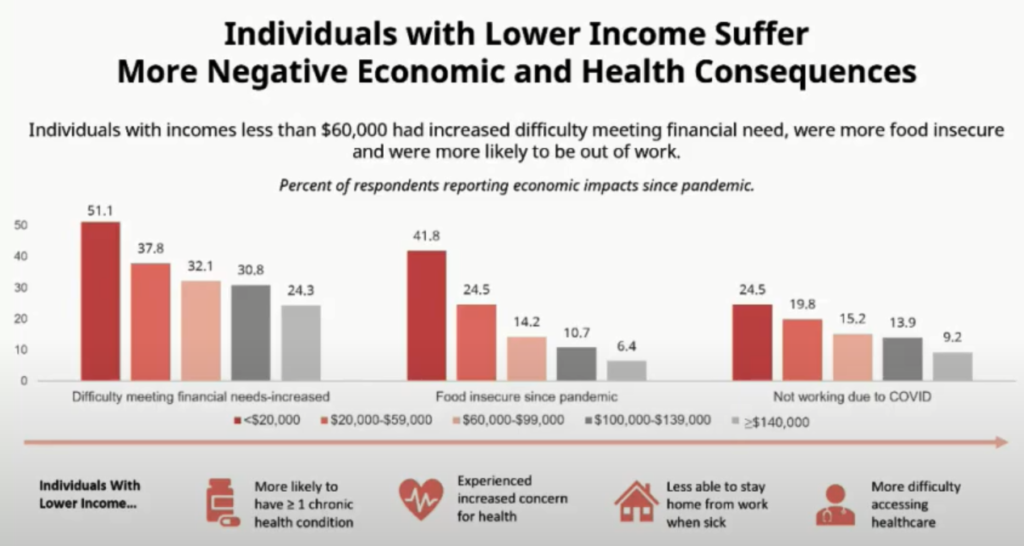 Graph depicting impacts of the COVID-19 pandemic by income level. (Supplied by the B.C. Government)

Lastly, impacts on school-aged children were taken into account, and the survey found that the pandemic has been difficult for them as well.

“What really strikes me across the board, three-quarters of parents reported that their children had challenges with learning during the past few months. We also heard from parents that 78% of them reported decreased connection with friends, which was concerning,” said Henry. 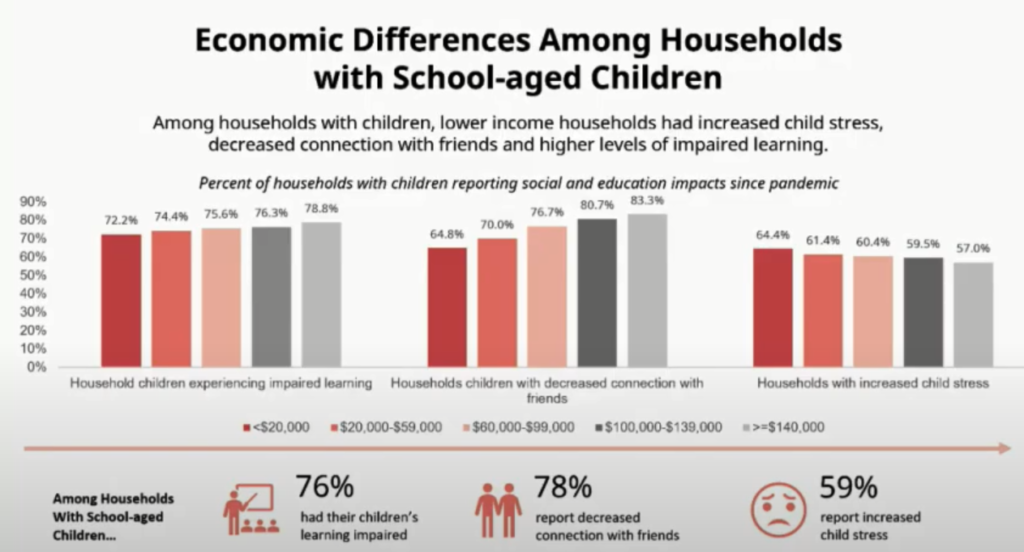 Impacts on school-aged children by economic level. (Supplied by the B.C. Government)