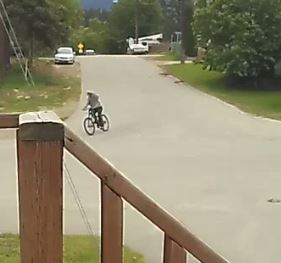 Castlegar RCMP has a suspect in custody following a pair of fires in Castlegar that were determined to be arson.

Arriving on the scene, RCMP said two homes were fully engulfed in flames as the Castlegar Fire Department was actively fighting back the flames.

Fire investigators are currently working with the RCMP to determine exactly how the fires were ignited and where. RCMP’s preliminary investigation found the fires are suspicious in nature.

“At this time the fire has been determined to be an arson, a suspect has been identified and arrested,” confirmed Cpl. Chris Manseau, BC RCMP spokesperson. “Video from the area has been obtained, and is being released in the hopes that witnesses or the public can further identify the person believed to be the suspect.”

Castlegar RCMP is asking the public for any additional video surveillance from Yew Street between 10:00 am and 11:00 am on Friday, June 5th to aid their ongoing investigation.

Anyone with information about the incident is asked to contact RCMP at 250-365-7721.