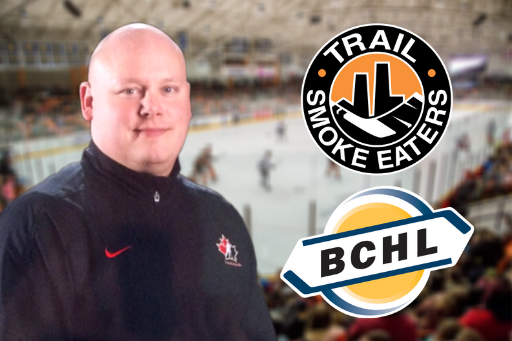 The new hire has been more than busy, honing his coaching craft in Alberta.

The impressive record did not go unnoticed by Smoke Eaters owner, Rich Murphy.

“Annie and I are extremely excited to announce Tim Fragle as the new Head Coach/General Manager of the Trail Smoke Eaters,” said Murphy.

“Tim brings extensive experience and knowledge to the Trail Smoke Eater program. The hiring committee spent substantial time and effort going through many applications and we feel that Tim and his background brings all the right pieces to continue to carry on the Trail legacy and grow what we have built over the last four years. We feel Tim is the perfect fit to come in and pick right up where Jeff Tambellini left off and we could not feel more secure in our decision. We are incredibly grateful and thrilled to welcome Tim, his wife Terra, and their two children, Ben and Madison to not only the Trail Smoke Eater hockey club, but to the Trail community and Smoke Eater family as well.”

Fragle found success even before his time with NAIT. From 2009 to 2016 Fragle served as  GM and Head Coach for the Sherwood Park Crusaders in the Junior A, Alberta Junior Hockey League.

Earning more wins than nit in hist time with the Crusaders, Fragle’ last year with the club saw a 39-19-2 record. In five of his six seasons, they advanced to the 2nd round of the playoffs.

As head coach of Team Canada West for the World Junior A Challenge in the 2015/16 season, Fragle  led the team to a gold medal.

“I am excited for our players and staff to be able to work with Tim. Having played alongside Tim and knowing his character, he is going to be a great mentor for our players off the ice, as well as a great coach on the ice and behind the bench,” Clare said. “Tim has always been someone I had hoped to be able to work with and I’m excited that now is the time Tim can come to our organization and continue to grow this program, which has been left in a great position by Jeff Tambellini. Having a background of playing in Trail and knowing the community, he embraces the opportunity to come back and strive for a BCHL Championship.”

Clare added, “The community of Trail is adding a great coach, person and family to its community today.”

But what did the Oil Country native bring to Trail years ago as a young lad? During the 1997-2000, he put up 50 points in 98 games. He also served as captain during the 99/00 season before moving back home to Alberta as a player.

There, Fragle finished his junior career in the AJHL with the Crusaders also as captain. His time in NAIT as a student athlete between 2001-2004 was spent as captain for two seasons.

The Trail Smoke Eaters say they are excited to welcome Tim and his family back to Trail and are looking forward to the season ahead.