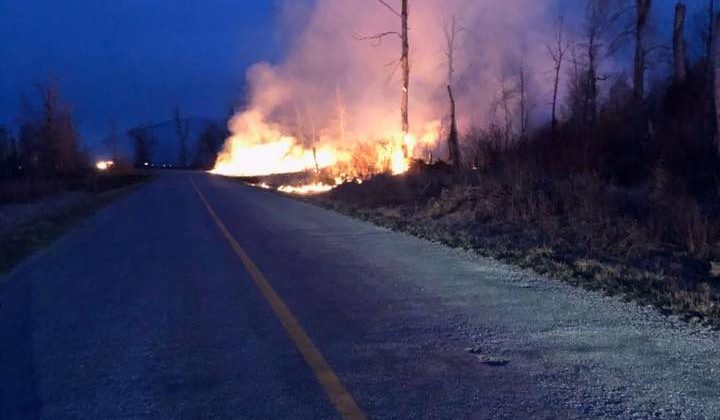 The Easter long weekend saw a couple of wildfires, one in the Creston Valley and another in Montrose.

A total of 43 firefighters from five different Kootenay Boundary Fire and Rescue stations responded to the Montrose wildfire on April 12, 2020.

The fire originated from a backyard before growing to 4.5 acres in size. KBFR says crews returned to the scene on April 13 to mop up any hots pots.

During the incident , KBFR called the police to investigate a driver that ran over their fire hose. Trail and Greater District Detachment RCMP said they located the driver at a residence in Trail.

The suspect then admitted to driving over the hose and was issued a $81.00 fine “for Drive Over Firehose contrary to Section 199 of the BC Motor Vehicle Act.”

Earlier that day crews were also called to put out two open burn piles that reached dangerous levels of intensity due to gusty winds.

Open burning is prohibited all throughout the Kootenays, which will be extended province-wide on April 16.