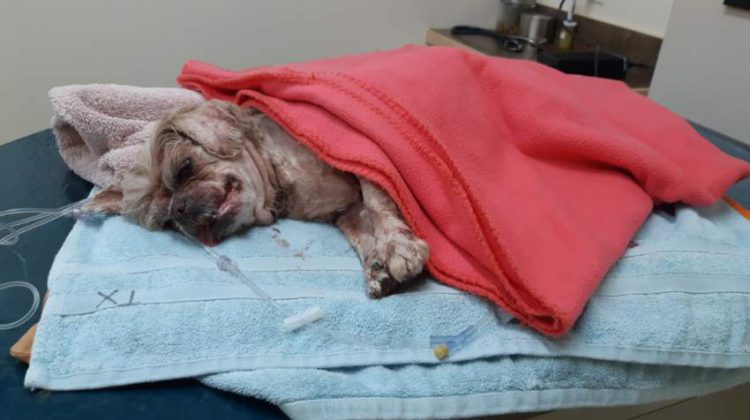 Lucy the Shih Tzu is recovering after being attacked by aggressive raccoons on Thursday. (Photo: Supplied by the owner)

TRAIL, B.C. – It looked like John Craig’s dog had been killed by a group of aggressive raccoons – until a phonecall on Thursday revealed she had survived the attack.

The dramatic event took place on Thursday morning around 7:30 in Gyro Park, Trail, when David Craig was walking his brothers two dogs.
“John has broken his leg, so I was out walking the dogs for him. I have done that many times, but never experienced anything like this”, David Craig told My Nelson Now.
The dogs were off-leash and were alerted by a scent when they both took off to a nearby bush.
Lucy, a small Shih Tzu, disappeared into the tall grass when David suddenly heard a commotion.

“It was horrible, whining, crying, and then all of a sudden nothing. I ran in there and found two racoons on top of her, and she was all bloody. I thought they were eating her”.
The swampy terrain did not offer any rocks or sticks that could be used as a weapon against the raccoons, who ignored Davids attempts to scare them off.
“I was screaming and yelling, but they did not care at all. They did not even acknowledge me. I thought they were so hungry that they would come after me too.”

In shock, David managed to get the other dog out of there, and retreated.
For several hours he assumed Lucy had turned to racoon food.
But the story took a turn when a phonecall revealed Lucy had been found and rushed to the veterinary office.
“That felt even worse, to know she was alive and that I could have done something more”, David says.
Lucy was let back home to her owner on Friday and appears to be recovering well.
“I will never go to the park again without a leash”, David says.

The city of Trail has put up signs warning of the aggressive racoons after the conservation officer investigated the scene.
Raccoons are considered schedule B wildlife and may be captured or killed on private land only for the specific purpose of protecting property.
This essentially means your dog or cat gets killed or injured.
No hunting license or open season is required.
On Crown land, a person must abide by the open hunting seasons for Schedule B species.
If a person injures wildlife listed in Schedule B, the person must kill that wildlife.