Evangelist criticized for homophobia sparked protests in Castlegar on Sunday 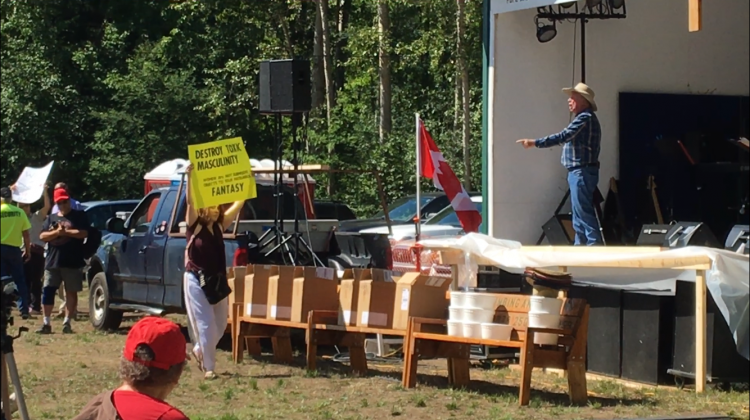 A protester was escorted off by RCMP after she walked up in front of the stage. (Photo: Ludvig Drevfjall, My Kootenay Now)

CASTLEGAR, B.C. – A controversial preacher criticized for anti-gay statements and archaic views on equality spoke in front of a crowd of around 500 in Castlegar on Sunday morning.

Protesters had gathered next to the stage where Angus Buchan, a South African evangelist preacher held his sermon.
The event was the finale of the “Mighty Men’s conference” – a Christian conference with only men allowed to attend until the final day when the campground was open to the public.
The conference was held at Pass Creek over the weekend and featured program points such as “The Man you’re called to Be” and “Watchman of the House”.
It was the first time the conference was held in Canada, and the turnout was according to event staff around one thousand in total.

“I could not believe what I was hearing. The misogyny is unbelievable, and listening to him today speaking about “spare the rod and spoil the child, and calling women hags… I just could not believe it”, protester Tatjana Martin said.
71-year old Buchan is based in South Africa, but speaks at events around the world where he has drawn crowds in the millions with his message, described as ultra conservative Christian.
He has been known to promote ideas that women should submit to men in the household, and condones physical punishment of children as means of discipline.
“The more I love my wife, the more she submits to me”, Buchan said on Sunday in Castlegar, prompting wild cheers and applause from the audience.
He continued, “Ladies, submit to your husbands!”
Buchan also said he places blame on men if he sees a woman looking like “an old hag”.

Buchan has previously made comments about homosexuality.
In a quote from 2008 the South African news organization IOL reported Buchan saying:
“I cannot ever agree that homosexuality is right, I can not bless it. I love them though, but they need help. We have prayed for them and God has changed their hearts”.
His speaking events have been repeatedly subject to protests from LGBTQ-advocates and women’s rights organizations.
In 2016 Buchan was reportedly banned from speaking in Scotland after a campaign put pressure on the venue he was scheduled to appear at.

Around 40 protesters attended the event in Pass Creek on Sunday morning.
The protesters held signs with messages and pride flags, and stood by the side of the stage as Buchan spoke.
One protester walked up in front of the stage with a placard but was escorted away by RCMP.
Staff associated at the event was positioned as a barrier between the stage and the protesters.
“They chose to think it is okay to be gay, and we chose to think it is not okay. It is our right to believe that. I love them, but I do not agree with what they are doing”, one person who identified himself as staff at the festival told My Nelson Now.

After the event concluded, Buchan refused to answer a direct question from My Nelson Now on what his views are on homosexuality.
“Thank you, good bye”, Buchan said before leaving in a car surrounded by several security staff.