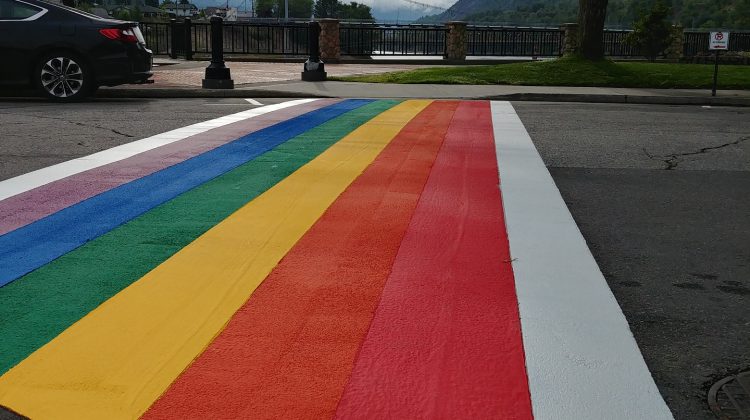 A new rainbow crosswalk has been installed in downtown Trail near the Riverfront Centre (Alex Skultety, MyKootenayNow.com staff)

Trail has now joined the many communities across the world which have installed a rainbow crosswalk. The colourful addition to Trail’s downtown was painted yesterday – a much awaited event for many including Addison Oberg, who brought the initiative city council for support over a year ago. Council agree to fund half of the project, but ended up paying slightly less than 50 per cent thanks to financial donations from generous sponsors.

In total, the cost was roughly $10,000 with over $6,000 coming from fundraising efforts. A plaque is also included in that amount.

“The community really showed that they wanted to see it happen with all the support that we got,” said Oberg, who is a member of Trail Pride. “And with the City of Trail too, this is something we all really believed in.”

The idea began during a conversation with friends who pointed out that there wasn’t yet a rainbow crosswalk in the Silver City.

“I was like, that’s not going to stand. So, I teemed up with Freedom Quest and we decided to do something about it,” said Oberg.

It was installed near the Riverfront Centre and Jubilee Park. It adds to the downtown’s revitalization, said Oberg, and will “liven it up” a bit. Most importantly, it serves as a symbol of inclusivity and support for the LGBTQ-plus community.

A celebration will be held on June 14 to recognize the sponsors starting at 6:00PM. 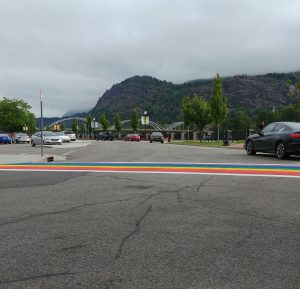 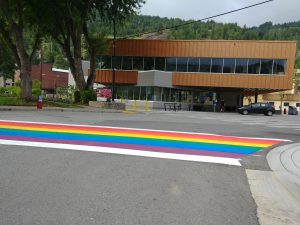