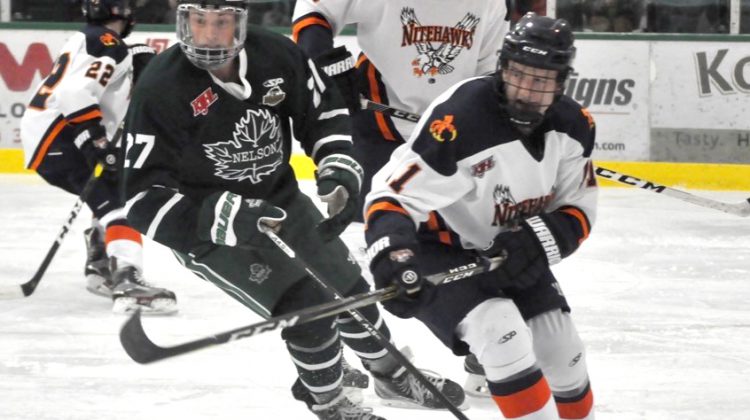 Jack Karran was the captain of the Kootenay International Hockey League’s Nelson Leafs in the 2018-2019 season. A native of Grand Prairie, Karran will join the Selkirk College Saints hockey program for the 2019-2020 British Columbia Intercollegiate Hockey League Season. (Supplied by Selkirk College, Tyler Harper photo)
Two players you’ll recognize from around the KIJHL are now teammates playing for the Selkirk Saints.
Former captain for the Nelson Leafs, Jack Karran, will make his way back to the area in September from Grand Prairie, Alberta.
“I’m excited; I’m looking forward to it. I like living in the Kootenays,” said Karran.
The centre was recently added to the roster along with Evan Gorman, former captain and defenseman for the Grand Forks Border Bruin. Karran described his former opponent as tough to play against.
Karran finished in the top ten in league scoring. Gorman led the league in defenceman scoring.
Selkirk College’s Athletics and Recreation Coordinator Kim Verigin described both players as “two great leaders” and feels they will bring tremendous energy on and off the ice. Selkirk’s program “provides a great opportunity for players who have completed their junior careers to continue with their athletics and most importantly pursue their goals in post-
secondary,” she added.