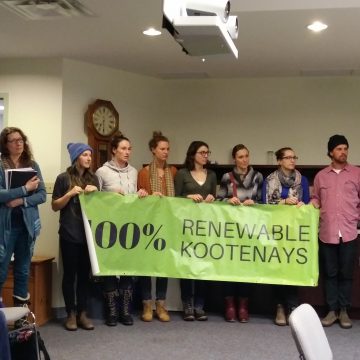 Members of the West Kootenay EcoSociety looked on in anticipation as Nelson city council debates their request to join the 100% Renewable Kootenays initiative.

The West Kootenay Eco Society had its first meeting with the five local governments that have committed to becoming 100% renewable by 2050.

There are only 12 local governments across Canada that have taken the pledge, which included Rossland, Nelson, New Denver, the Village of Slocan, and the Regional District of Central Kootenay.

“We really don’t want to reinvent the wheel. We need to make sure we’re integrating the best practices from all the other cities around Canada and around the world that have already taken steps ahead in developing their 100% renewable strategy,” said the Eco Society’s executive director Montana Burgess.

Vancouver was the first to join the initiative and has already developed a strategy, but Burgess highlights that things will be different for rural areas than urban. A special guest speaker from Oxford County, Ontario came to last week’s meetings who was able to provide a more rural perspective.

“They’ve already developed a strategy so they’re a step ahead of us, so we had the person who is leading that strategy development come out and tell us what they did, what worked, what didn’t work, so we could build off their lessons to start building that strategy,” Burgess explained.

The next municipalities the West Kootenay Eco Society are hoping to get on board are Castlegar and Creston. Working regionally makes more sense than for individual municipalities to have their own plan, according to Burgess. The idea is that they will come together and form a working group which will meet every couple of months.

“In between that time we have some funding through the Federation of Canadian Municipalities to have a staff person here doing that heavy lifting to do the research and drafting different sections of the strategy to reach 100% renewable energy,” explained Burgess. “So local governments when they come together every two months have some really great starting points to review, give input and then they can walk away and keep doing that work for them.”

The West Kootenay Eco Society’s website describes the goal is to “phase-out fossil fuels and transition to 100% renewable energy at the community-level, including electricity, heating and cooling in buildings, transportation and industry, no later than 2050.”