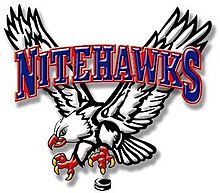 Reid Wilson broke the tie in the extra frame to lead the Nelson Leafs to a hard fought 2-1 victory over the Beaver Valley Nitehawks.

Neither team scored through forty minutes with a tally from Nicholas Onofrychuk breaking the goose egg in the third.

Michael Hagen responded with an unassisted marker for the visiting Nitehawks to send the game to overtime.

The best-of-seven series is now tied at one game a piece with game three slated for tomorrow (Tuesday) in Fruitvale.