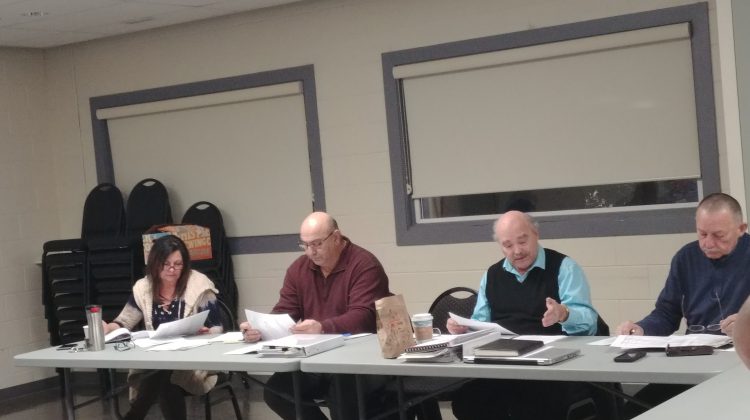 The Castlegar and District Rec Commission is seen at its January meeting. Area I RDCK director Andy Davidoff is second from right (Photo: Alex Skultety)

A rural Castlegar regional director says he’s trying to find ways to reduce what has been likened to “a perfect storm of taxation.”

Andy Davidoff, who represents Thrums, Tarrys, Pass Creek, Glade, and Shoreacres, says some services in his area are slated to go up as much as 50 per cent if the proposed budget is adopted unchanged.

“This is the first time I have seen such a huge overall taxation lift since I have been a director,” said Davidoff, who was first elected in 2011. “I’m trying to keep a handle on tax increases throughout Area I.”

Davidoff is proposing to cut the increase planned for the Castlegar and District Recreation Complex’s ice arena from ten per cent to five per cent, with the remaining portion to be made up through reserves.

His idea will be discussed Friday by the RDCK board during a budget meeting.

Davidoff is also unhappy the RDCK board has approved a 25 per cent increase in the maximum that can be taxed for the rec complex’s arena and aquatic centre. He claims it’s an end run around last year’s failed referendum on borrowing money to improve the recreation complex.

“In essence, it’s a back-door approach by the majority of the commission to override the referendum result,” he said.  “Hypothetically, we could be facing $1.5 million to $2 million of additional taxation per year for the next five years without going to referendum.”