World War One experiences told by a Trail soldier 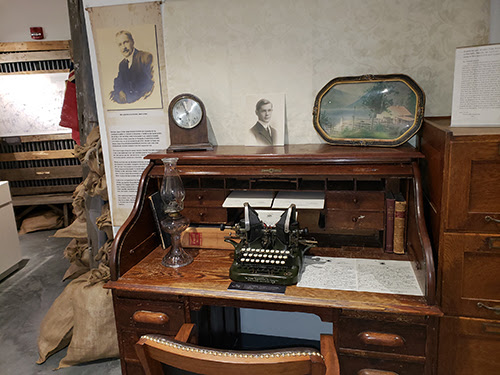 An unexpected donation led the Trail Museum and Archives to put together the newest exhibit. A number of artifacts and dozens of letters, some more than a hundred years old, formed The Affectionate Son: The Great War in Words. The letters recount Trail resident Jimmy Schofield’s  experience as a soldier in World War One to his mother, father, sister, and brother from June 1916 to November 1918.

Collections Coordinator Joyce Austin says they knew the donations had to become an exhibit.

“When I started sorting these letters it was, holy cow, look at what we have here. It’s just [an] amazing collection of letters and detail of the war and his life overseas. So, we thought, you know, we should really honour this family and do an exhibit.”

Schofield was injured numerous times and was deployed in France during the war, all of which Austin says is touched on in his letters.

“His letters just go into great detail about what life was like over in France. You know, building the trenches, just walking through the mud over there just sounded horrible. He was wounded three times, not severely but he goes into great detail of that and where he went to convalescent hospitals.”

Some of his medals are also on display in the exhibit and there’s a trench scene to give people a feel of what it was like, however without the mud, Austin adds.

The Schofield family came to Trail when Jimmy’s father was transferred as a station agent for CP Rail. His father, James H. Schofield, also served as mayor and Conservative MLA for 26 years and was campaigning for conscription at the time. He also owned a real estate and insurance business where Jimmy worked when he returned to Trail in 1919.

The exhibit comes in recognition of the 100th anniversary of the end of World War One. It launches Wednesday, November 7 and runs until sometime in the New Year at the Trail Riverfront Centre. Admission is free.