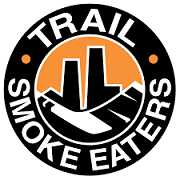 The Trail Smoke Eaters have shaken things up with a three-way trade.

They shipped out 19-year-old scorer Levi Glasman to Powell River and got back 18 year old defender Powell Connor from Chilliwack.

The 6’1″ 180 pound blueliner won an RBC Cup national championship with the Chiefs a season ago and is described as a defense-first guy that brings a physical element to the club.

In the team’s official press release, Head Coach and GM Jeff Tambellini had this to say about the trade, “By acquiring Powell Connor, we believe our team is better prepared to win in the playoffs. Powell is one of the top defenders in the BCHL and is coming off winning a National Championship in Chilliwack.”

Connor has a goal, 4 points, and 21 penalty minutes in 18 games this season with Chilliwack and could suit up for his new team either tonight at home versus Prince George, or tomorrow in Salmon Arm.